To Compete You Must Be In the Race 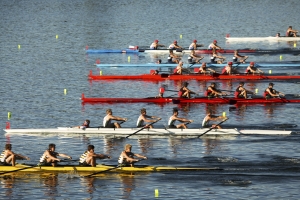 It does not matter a race is being run. You cannot win that race if you do not enter it. Making the commitment to compete is more than filling out a few forms and showing up at the starting line. It requires the ability to persevere when the first obstacle is encountered, the first pothole is stepped, or the first detour is encountered. If competitive racers stopped at the first “obstacle,” few races would have anyone arriving at the finish line.

Entering the race means showing up with some of what you need to win. It doesn’t have to be the newest, shiniest, or coolest equipments. You don’t even have to have all the equipment at the moment you enter the race. You must have the key pieces to get started. Few runners would compete without shoes (although I do seem to recall many, many years ago a runner who competed without shoes and did pretty well). A cyclist doesn’t show up with a bicycle and no tires. Tri-athletes show prepared for each stage of the challenge, and they don’t carry all the equipment for the entire race with them from the beginning. Instead they approach the race in stages and make sure they have the right equipment available when it is needed.

When you watch a race of any kind, you get to know who is competing. The entrants are known and the names are announced or you can learn them by looking at the list of entrants. The big names are up on the big boards for everyone to see and hear. They get the attention and are in the spotlight, but they aren’t always the ones who when the race. The rookie, the long shot “old-timer”, the best strategist, can often walk away with the title. None of them would have a chance, if they didn’t make it to the starting line!

Recovering from a “Wreck”

Sometimes you wonder as you watch a race how a competitor who seems to have no chance of recovering from a wreck, a blow out, a bad call, or a bad shot can recover from the mistake. Rarely after “hitting the wall” do you expect to see them get back in the race, let alone win. But time and time again, you see these competitors with heart and determination. They pull together a winning performance against the original odds that were against them and “bad luck” at the race. They have the ability either to put the event behind them or use it as momentum to fire their determination and competitive spirit on.

Another thing required to stay in the race is having the proper fuel to keep going. The car that runs out of gas because of failed pit strategy can lose the race just inches from the finish line. A runner who fails to maintain adequate hydration and other energy inputs can end up sidelined and hauled away on a stretcher.

Competing in Business Requires Being in the Race

Just like any other competitive sporting event, you have to enter to win. You have to show up and do more than fill in the entry form. You have to come ready to play, ready to compete, and ready to let people know you are in the race.

From the moment you form the business, you have entered the race. The problem may be that no one can tell. No one knows you are there competing. You are part of a faceless mass of competitors all grouped together and indistinguishable from each other. You have to…

Break Away from the Pack

As you move forward, you need to find a way to get through the competitors surrounding you, while conserving resources for competing with those who are already out in front. You need a strategy for breaking through the confines of this group and becoming the leader of this mass of competitors. Once you have made it through, then you will look for a new strategy and tactics and set your sights on.

When you break away from the pack of unremarkable commodity competitors, when you get to make that first stride which leaves that group in your rearview mirror, you now must develop a new strategy for how you are going to pursue the next leg of the race. Do you set your sights on the next visible competitor or do you look to the true race leader and say I’m going after her?

It Depends on How You Compete Best

For some competitors, looking at the length of the race and the size of the gap between their current position and the leader makes them say “It’s too big a challenge. I can’t do that!” These competitors can, however, look at the person just in front of them and say “I can catch him!” For those competitors, setting their sights on the closest competitor and passing him or her up is “doable” and becomes a series of success that spurs them on to finish and compete strongly while using resources (energy – mental and physical) wisely.

Other competitors are spurred on only by the magnitude of a challenge. They always set out to beat the leader. From the entry into the race until they cross the finish line (or don’t finish at all), they keep their sights on the race leader. Unfortunately in business, when companies compete with this strategy, they add to the challenges of each race. These are often the result of competing with the “big dog” first and foremost:

Business is a Competitive Race – Have You Entered to Win?

Business requires more than showing up at the starting line. It requires equipping yourself to compete. It requires finding the right combination of singular effort or team competency. Business requires resources and strategy that let key prospects and the market know you are IN THE RACE! Few businesses can wait to be “discovered”.

To get in the race to win:

And finally, don’t believe that seeking outside help and objective advice is unnecessary or too expensive. Few companies have the ability to see the complete picture of their own activities. Objective voices are invaluable in critiquing your competitive technique. To say that “If there is an answer, I would have already found it.” may in fact be true, but no one is omnipotent in life or in business. To win the race, you have to be in it to win. Part of being in it to win is the ability to surround yourself with talented people who can point out issues with the strategy, the course, the equipment, or the tactics. No one races entirely alone.

This site uses Akismet to reduce spam. Learn how your comment data is processed.